The Bavarian Warmblood is one of the heavier of the warmblood breeds.  He evolved from an older breed of horse, the Rottaler, from a region of Southern Germany.  The continuation of regional breeds such as this one is supported by the German government.

Bavaria, the southern-most province of the country, is one of the oldest horse breeding regions in Germany.  The Bavarian Warmblood was based on the local Rottal (or Rottaler) horse from the Rott Valley, which was used as a battle charger.  Since WW II, the breed has been refined using Thoroughbred and Trakehner bloodlines.  The Bavarian Warmblood was first registered as a separate breed in 1963, and is used as a good all round sports horse.

The Bavarian is a large and elegant horse, similar to the northern German Hanoverian, with a strong yet well set neck, a powerful chest, long and sloping shoulders, as well as high withers.  He has a well-muscled, rather long back, and strong legs with massive hocks.  He is renowned for his strength and good character.  He lacks speed but is well suited to dressage and showjumping. 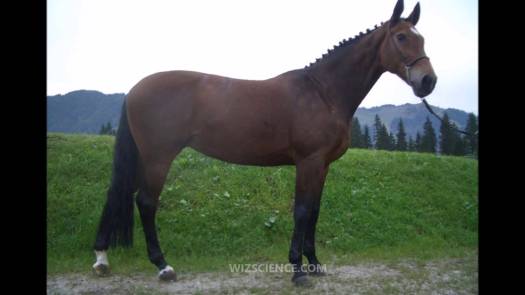