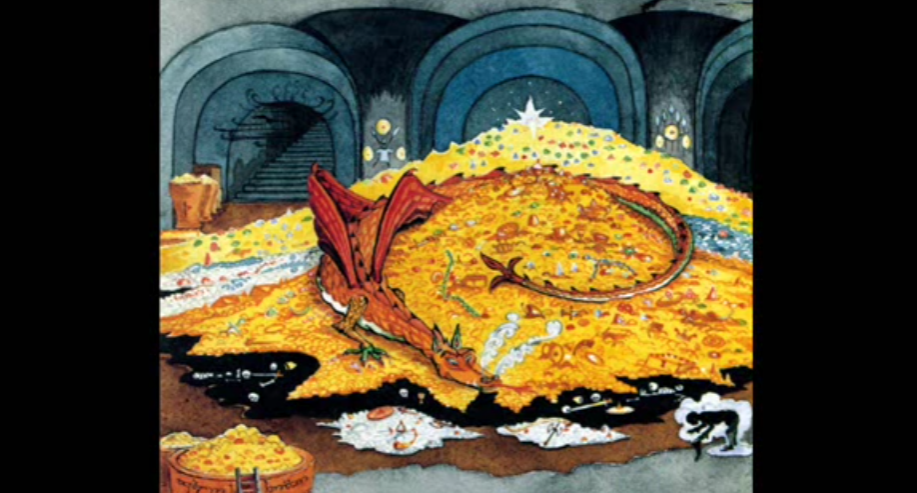 When the moon was new and the sun young
of silver and gold the gods sung:
in the green grass they silver spilled,
and the white waters they with gold filled.
Ere the pit was dug or Hell yawned,
ere dwarf was bred or dragon spawned,
there were Elves of old, and strong spells
under green hills in hollow dells
they sang as they wrought many fair things,
and the bright crowns of the Elf-kings.
But their doom fell, and their song waned,
by iron hewn and by steel chained.
Greed that sang not, nor with mouth smiled,
in dark holes their wealth piled,
graven silver and carven gold:
over Elvenhome the shadow rolled.

There was an old dwarf in a dark cave,
to silver and gold his fingers clave;
with hammer and tongs and anvil-stone
he worked his hands to the hard bone.
and coins he made, and strings of rings,
and thought to buy the power of kings.
But his eyes grew dim and his ears dull
and the skin yellow on his old skull;
through his bony claw with a pale sheen
the stony jewels slipped unseen.
No feet he heard, though the earth quaked.
when the young dragon his thirst slaked.
and the stream smoked at his dark door.
The flames hissed on the dank floor,
and he died alone in the red fire;
his bones were ashes in the hot mire.

There was an old dragon under grey stone;
his red eyes blinked as he lay alone.
His joy was dead and his youth spent,
he was knobbed and wrinkled, and his limbs bent
in the long years to his gold chained;
in his heart’s furnace the fire waned.
To his belly’s slime gems stuck thick,
silver and gold he would snuff and lick:
he knew the place of the least ring
beneath the shadow of his black wing.
Of thieves he thought on his hard bed,
and dreamed that on their flesh he fed,
their bones crushed, and their blood drank:
his ears drooped and his breath sank.
Mail-rings rang. He heard them not.
A voice echoed in his deep grot:
a young warrior with a bright sword
called him forth to defend his hoard.
His teeth were knives, and of horn his hide,
but iron tore him, and his flame died.

There was an old king on a high throne:
his white beard lay on knees of bone;
his mouth savoured neither meat nor drink,
nor his ears song; he could only think
of his huge chest with carven lid
where pale gems and gold lay hid
in secret treasury in the dark ground;
its strong doors were iron-bound.
The swords of his thanes were dull with rust,
his glory fallen, his rule unjust,
his halls hollow, and his bowers cold,
but king he was of elvish gold.
He heard not the horns in the mountain-pass,
he smelt not the blood on the trodden grass,
but his halls were burned, his kingdom lost;
in a cold pit his bones were tossed.

There is an old hoard in a dark rock,
forgotten behind doors none can unlock;
that grim gate no man can pass.
On the mound grows the green grass;
there sheep feed and the larks soar,
and the wind blows from the sea-shore.
The old hoard the Night shall keep,
while earth waits and the Elves sleep. 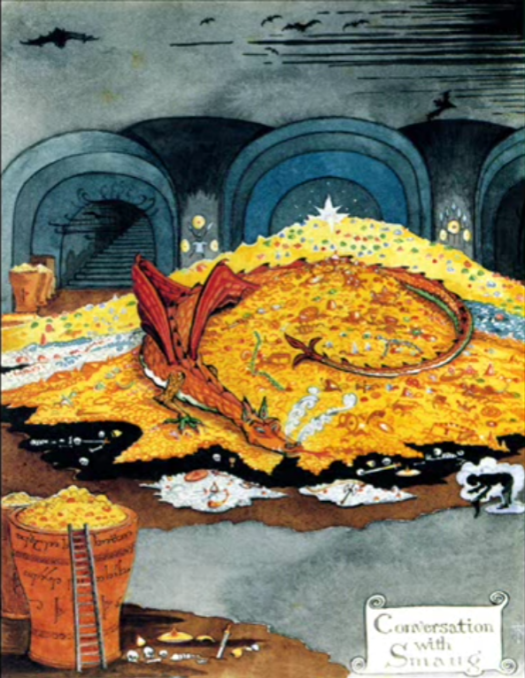 In 1923 Tolkien published a poem called IUMONNA GOLD GALDE BEWUNDEN, the first version of what was to become in 1970 THE HOARD.  The first title is better, though, for it means ‘the gold of ancient men, wound round with magic’, it is line 3052 of BEOWULF, and it points to a notorious difficulty in that poem over the hero’s motives.  When he went to fight HIS dragon he appeared to do so for the best of reasons, i.e. to protect his people.  On the other hand he also showed a keen interest in the treasure, which the dragon was only trying to guard, having been provoked by the theft of a cup by a passing runaway (or ‘burglar’).  At one point indeed (…) the poet seems to say that there was a curse on the gold, so that the man who plundered it ‘should be guilty of sin, be shut up in devil’s haunts, bound in hell-bands and tormented grievously.’ (…)  Maybe the dragon-curse is (…) avarice.  So Tolkien suggested in the 1923 poem, tracing in successive stanzas the transmission of a treasure from elf to dwarf to dragon to hero and ending with the picture of an old and miserly king overthrown by his rivals and leaving his gold to oblivion.  All the characters in it are the same: they begin with vitality, mirth and courage, they end in age, wealth and squalor.  Their decline is caused by gold.  Could their progress also be a kind of analogue of human history, beginning in heroic endeavor and ending in ‘commercialism’, ‘materialism’, ‘industrialism’, that whole series of distinctive modern concepts which nevertheless centre if not on gold, on that ‘idolatry of artefacts’, which C.S Lewis called, in evident agreement with Tolkien, the ‘great corporate sin of our own civilization’?

~ Tom Shippey: The Road to Middle Earth: The Bewilderment of Smaug.

4 Replies to “Our Own Dear John Ronald: Gold Galdre Bewunden”