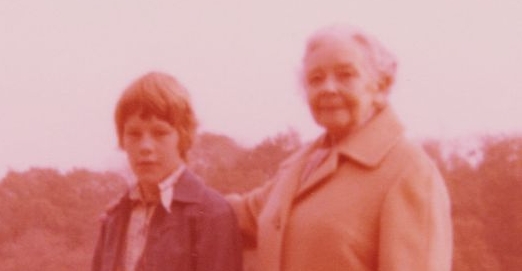 Anna Kothe was a good friend of my father Jupp Kappius from 1944 until his death in December of 1967, and continued to be a friend of the family until her own death on this day, October 24th, 26 years ago. Here is a little bit of her story.

Born into a Lutheran family on 26 May 1898 in Hemelingen which later became part of the city of Bremen, Germany, and daughter of Johann Hermann Hinrich Kothe and his wife Elise nee Blohm, Anna Gesine Elisabeth Kothe learned home economic and trained to be a cook. She became politically interested and involved, and in the 1920s and 1930s kept house for various ISK members who shared flats. We have good reason to believe that she joined the ISK in 1925 because it was then that she left the Lutheran church, something that was required of ISK members.

In 1934, she started running one of the vegetarian restaurants the ISK owned and used for centers of information exchange and contact among group members, the VEGA in Hamburg. When the ISK group in Hamburg got caught by the Gestapo in December of 1937, Anna lost the restaurant by order of the Gestapo in May of 1938, was arrested, convicted, and sent to prison in Berlin and Luebeck for two and a half years, from 17 March 1938 to 22 September 1940. Being a vegetarian like all ISK members, times were doubly hard for her there, but apparently she was able to steal some of the candy she and the other inmates had to pack at the Luebeck facility to beef up her portions (pun unintended) and survived, her spirit unbroken.

After her release in September 1940, she started to work for Ernst Volkmann and his wife in their house in the Burgstrasse 15 in Bochum, the very same house in which my father was later hid when he entered Germany clandestinely in 1944, and where Anna continued to live for a while after the war. When the war was over, Anna joined the new-formed SPD and later the AWO, an organization concerned with the well-being of workers. In both organizations she was an active member for well nigh 45 years. Otherwise, after leaving the household of Ernst Volkmann in Bochum, she kept house for Willi Eichler in Koeln and Bochum, and after his death continued to live with Willi’s wife Susanne Miller until her own death on 24 October 1994.

Requiescat in Pace, Anna. The public might have forgotten you, but we surely have not. We owe much to you and are grateful for the friendship and support you have shown Jupp as well as us even after Jupp was long gone. The featured image shows Anna with Jupps son Peter in 1978 during a visit in Bremen.

Everyone who knew Anna and talked about her praised her strength of character and her steadfast conviction – and her cookies. During the war, she was the living chronicler of the ISK, knowing everything about everyone, where they lived, what their history was and their family situation, and how they were doing. She was also the one who kept contact with the ISK members in Switzerland and made sure Aenne (as “Jutta”) knew where she would find a comrade when she traveled into the Reich in 1944 and 1945.

To illustrate how Anna once managed to dissuade a Gestapo infiltrator and thus saved not just my father’s skin but that of several others as well, we shall quote from a letter Jupp wrote from London on 10 May 1945:

The Story of Gerda

About the middle of January, 1945, in fact the same day Jutta (i.e., Aenne Kappius) arrived in Bochum, a courier came from Hamburg warning us of arrests of friends that had taken place in Berlin, Hannover and Goettingen. These friends were members of the ISK who had formerly been imprisoned for illegal activities. As the friend I was living with (i.e., Anna Kothe) had been involved in that and furthermore had recently been in communications with some of those arrested, we had to expect a visit from the Gestapo. Therefore we moved Jutta and myself out of this place, decided to keep her in Bochum and send somebody else to do her round of visits with a view of trying at the same time to find out what had happened. While this courier was on his way a woman turned up at the Burgstrasse one late afternoon. She pretended she had come from Berlin to warn our friends of the arrests that had taken place, giving to understand that she knew the people arrested and also knew about their connection with our friend she was talking to (i.e. Anna). Our friend, however, was wary, did not deny to know those arrested but pretended she couldn’t think of any reason why they should have got into trouble with the Gestapo. The woman visitor then suggested it might have something to do with Jutta, of whose former visit she knew, of whose impending visit she was informed she said, whose real name she actually mentioned and whom she pretended she was very much concerned to warn of the danger she was in. Our friend, however, didn’t let on anything, pretended she had never heard of Jutta and anyway, didn’t see at all what the other woman was getting at. This woman then tried to make our friend more confident, telling her she was on the move herself to avoid arrest, saying she had been staying with a friend in Duesseldorf for the past fortnight and that she had really hoped our friend would be so kind and put her up for a day or two. This our friend flatly refused to do, claiming it was not her house and not her flat so she could on no account dispose of the flat without permission of her employer (i.e. Ernst Volkmann) and, anyway, she would have nothing to do with anything that would get her into trouble with the police. She stuck to this line, although all the time her own mind was troubled lest she might be wrong and the visitor was really genuinely trying to warn her and she was turning her out of doors (it was bitterly cold). Still she stuck to it, and the visitor turned away, complaining of her disappointment to find such inhospitable people when she expected to meet real solidarity. (…)

Gerda had no success in the Ruhr nor at any other place. Perhaps our friend in Bochum had really convinced her she didn’t know anything, for we never noticed anything suspicious in the way of watching or shadowing; the Gestapo must have dropped the thing.

Pictures of a younger Anna and of her friends and comrades can be found at the Archiv der Sozialen Demokratie der Friedrich-Ebert-Stiftung in Bonn, Germany. They can be viewed and ordered online. Please click on the thumbnail above to go to their photo research page, query ‘Anna Kothe’.