Time is an odd thing: Some things feel close and remote at the same time.

This week, we remember Donald Eugene Denney, our father and grandfather, who passed away 24 years ago, on 11 July 1996.  That sounds like a long time ago, just under a quarter of a century, and a lot has happened since then, but at the same time, it feels like it was only recently.

Donald Eugene Denney was born on 22 February 1934 in Fairfield County, OH, third child of Lorain and Irene Denney, and their first and only son.   He grew up on his father’s farm.  Below is a pictures of him in his 20s at National Guard Camp during the Korean War in the 1950s.  The photo was in the local newspaper in August of 1956; Donald E. can be seen on the right:

Another somewhat public photo from the 1970 you can see below.  It was published by the Sixth Ave. United Methodist Church, one of the clients for whom he did janitorial work at the time.

Life didn’t always hand Donald Eugene lemons, but he surely didn’t have it easy either.  When the economy tanked in the 1980s, he lost his long-time job at Alten’s Foundary and never found a job that would last again.  Mind you, he never had a shortage of odd jobs, but the economic situation in the 1980s wasn’t a whole lot better than it is now and there were many like him who basically had to retire when they were in their 50s.

Donald E. died on 11 July 1996 at the age of 62, he was laid to rest in Saint Paul Lutheran Cemetery in North Berne, Ohio.  He was the first of his immediate family (not counting in-laws) to pass away, after a short and rare illness.  His father followed him about half a year later, his mother lived for another twelve years, and his three sisters are all still alive, as well as his wife Karen and their two sons.

Requiescat in Pace, Dad.  We think of you every day. 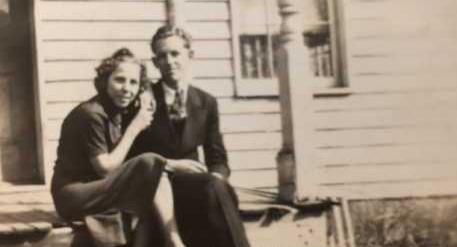 We have mentioned our (great-) grandmother Naomi before: Born Naomi Ann Snyder on 6 Jan 1921, she married James Christman in 1940 – you can see the two of them in the above picture -, had a daughter in 1942, was widowed in 1944, and married again a few years later, which is why in her obituary, she shows up as Mrs. Richard Grubbs (see below).

Today, 15 May, is the anniversary of her death.  She died in 1962 at the age of 41, too early for any of us to have known her.  But we can remember her and what we know about her, especially but not only today.  Her picture as seen above, the only one we have of her, has been hanging on our fridge ever since we got it.  It is good to remember your ancestors.

Listen to the Music of Nature.  Just for a moment.

Ironically, the Long line is one of the shorter ones in our tree.

Our 2nd and 3rd great -grandfather Isaac Long passed away this week 110 years ago.  His grand-daughter Irene in time became our (great-)grandmother Denney.

Isaac was born on the first day of 1828 in Hocking Co., Ohio.  As far as we know, his parents were Elder Daniel Long and Nancy Miller, who both were in their late 30s by that time.  We have record of two siblings of Isaac’s, an older brother and a younger sister.  While we are reasonably sure about Elder Daniel actually having been Isaac’s father, we have no sure data about Elder Daniel’s parents.

When Isaac was 30, he married Anna Tatman on 26 April 1858.  They were still living in Hocking County at that time, but relocated to Fairfield Co., OH in or around 1860.  Isaac and Anna had nine children together, two boys and seven girls.

Although they had lived most of their respective lives in Ohio, Isaac E. lies buried in Indiana, and so does his wife Anna.  Quite possibly they went to live with one of their children in their later years, several of whom appear to have moved to Indiana around the turn of the century.

Isaac passed on this day, 20 March, in 1910, and together with his wife rests in the United Brethern cemetery in Warsaw, Kosciusko County, IN.

Our 2nd and 3rd great-grandfather George Mulford, who passed away today 95 years ago, lived close to the Ohio River, on the WV side.

The Mulfords had been living along the Ohio River for some time when George Thomas was born on 28 December 1849 to Abraham Mulford and Nancy Slack.  At the time, they were living in Wyoma, Mason County.  As far as we know, George Thomas was the youngest of three children; he had an older brother and an older sister.

On 7 Aug 1875 at the age of 25, George Thomas married Arilla Jane Harris.  The Harris family, too, had been in Mason County for the better part of a hundred years.  The two of them had ten children together, six boys and four girls.  One of their daughters was our (2nd) great-grandmother Mattie, who married Steward Leslie Denney.

George Thomas died on 12 March 1925 at the age of 75 and lies buried in De Linn Cemetery (Clendenin District), Gallipolis Ferry, Mason Co., WV.  It appears to be a very small cemetery over all, but his wife Arilla, who died later that same year, rests there as well.

I wish there were more that I could say about the life of our 2nd (and 3rd) great-grandparents.  But we have no pictures of them, nor do we know much about them other than names and what census data and Find-A-Grave provide.  They came from old families that had been prominent in their own way throughout the centuries, both on the Harris and on the Mulford side, and so there are some of their forefathers we know more about than about these rather close relatives.  It’s a shame, but there it is. 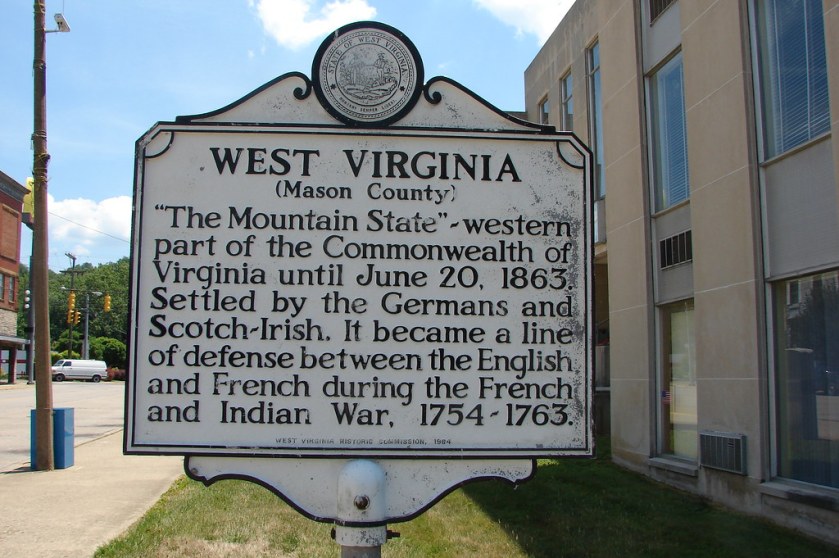 When I first moved to the area in the early 90’s I read the Vindicator with regularity.  I’d not previously lived anywhere that had local restaurants exploding in the dead of night and county prosecutors being shotgunned in Christmas Eve assassination plots.  I wanted to know what was going on, and the Vindy had the best coverage.

You can still read about it at AmericanMafia.com

The Vindicator Building, formerly known as the Youngstown Telegram Building is listed on the National Register of Historic Places.  Constructed in 1931 to house the Telegram newspaper,  the Telegram and Vindicator newspapers merged and shared this building after 1936, which was used to print daily newspapers until 1972.

Since 2017 the Art Deco style building has been a place for additive manufacturing for 3D printing.

YOUNGSTOWN, Ohio (WKBN) – Six days after The Vindicator made its 150th anniversary front-page news, the announcement came Friday that the newspaper will be closing. The final edition will be printed on Saturday, August 31. The website will also be shut down.

Today, we wish to remember our (2nd) great grandfather Harvey Hamilton Lindsey, father of Grandma Irene who is standing right behind her father in the family photo featured above.  He would have celebrated his 155th birthday this week!

Harvey Hamilton Lindsey was born on 11 March 1864, in Hocking County, Ohio, to Samuel Lindsey and Mary Elizabeth Skinner, the 5th of eight children.  Records indicate that he might have had a twin brother who possibly died early.

He married Susannah Long on 29 March 1889.  They had 17 children, 12 of whom reached adulthood.  Here is a newspaper clipping regarding their Golden Wedding Anniversary:

Five years after their 50th wedding anniversary, Harvey Hamilton died on 21 April 1943 at the age of 79, having lived all his life in Fairfield County, OH, as did his daughter Irene after him.  He lies buried in Hopewell Methodist Episcopal Cemetery in Clearport.  This is the inscription on his grave marker.  Note the discrepancy in his birth year.

Rest in Peace, dear Great-Grandpa Harvey Hamilton.  Your picture on our fridge makes sure that you are not forgotten. 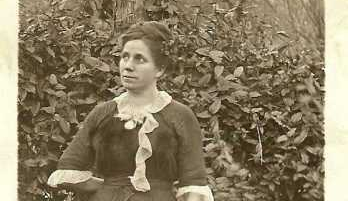 Today, we remember our maternal 2nd great-grandmother Anna Elwood.  She was born in June of 1878 in Ohio, and died in 1944.  Her last known residence was in Glouster, Athens Co., Ohio.  She appears to have lived most of her life in the mining communities in southern Ohio, and is buried in Shawnee, Perry Co., Ohio, along with many other members of the Fouts family.  She married William Lee Fouts in 1893, and among their children was our maternal great-grandmother Goldie Fouts.

Anna and William had eleven children between 1894 and 1916, and at least two of their children, Tommy and Evelyn, died during childhood.  Her parents are unknown to us at this point.  Their daughter Goldie, who was to become our grandmother’s mother, was their third child and first daughter.

The grandfather of our paternal grandmother on the Denney side, Samuel Lindsey, was born in 1827 in Fairfield County, Ohio.  He married Mary Elizabeth Skinner on May 17, 1855, in Meigs County, Ohio, and they had eight children in 18 years.  He died this day, November 2, in 1914, just in time to miss almost all of WWI, at the age of 87.

Since we do not have pictures of him, we chose old pictures of the area where he lived for illustration purposes.

Featured is an image of Mount Pleasant, also called Standing Stone, at the fairgrounds in Lancaster, Fairfield County, Ohio.  The old stomping grounds…

It’s that time of year again, when we blow off the dust from boxes of documents, photos, and old handwritten notes, reactivate the Ancestry.com account, and continue exploring the family’s history.

The material quoted below comes from the work of Richard F. Denney.  His web site was one of the first I came across when I caught the genealogy virus, many moons ago.  I had occasion one time to correspond with Mr. Denney, helping to correct a minor error in the record of my grandfather Lorain Franklin Denney.  Sadly, Richard F. Denney passed away July of 2011.  His genealogical efforts are greatly appreciated.

While I am not able, for obvious reasons, to attest to the validity of the Viking theory, it fits with certain personal experiences of a particularly Jungian flavor that I’ve had over the years.

“The existence of these archaic strata is presumably the source of man’s belief in reincarnations and in memories of “previous experiences”. Just as the human body is a museum, so to speak, of its phylogenetic history, so too is the psyche.”

Who Were The Very First Denney’s?

One theory that seems to have considerable merit is that the earliest Dennys were Vikings or North Men who settled along the Normandy Coast of France. French history tells of a Danish Prince named Bernard, who, along with his cousin Rollo, settled in Normandy. Members of this Norman colony or settlement of Danes were called the Danish Men or L’Denshmen or in French, L’Denne.

Some of these early Denshmen migrated across the Channel and settled in southern England.

Because of the unrest in the English country side, many of the Surrey Dennys migrated to Ireland and Scotland. Scotch and Irish Dennys were noted for large families. Many Dennys from England, Scotland and Ireland came to America in the late 1600s and early 1700s to escape hunger, unrest and religious persecution. Most of these people ended up in the Western Frontier which was then Western Pennsylvania.

Later, around the Daniel Boone era, many of these Dennys migrated on to Virginia, the Carolinas, Kentucky and Tennessee. Others continued on into Indiana, Illinois and Missouri. As a matter of fact, Daniel Boone trapped on the Raccoon Creek, Gallia County, Ohio about the same time period as when the first Denneys were to arrive in that area and settled around the creek.

Featured Image:  Viking ships on the Normandy coast. Scene from the Bayeux tapestry.